AN OFFERING OF HOPE, CONNECTION & COMMUNITY

I live in Bloomington, Indiana, an area with many trees and rolling hills, dominated by karst topography. I am a professor of Religious Studies at Indiana University with particular interests in environmental ethics, and science and religion. I am also an amateur birdwatcher whose hearing is, regrettably, quite imperfect. 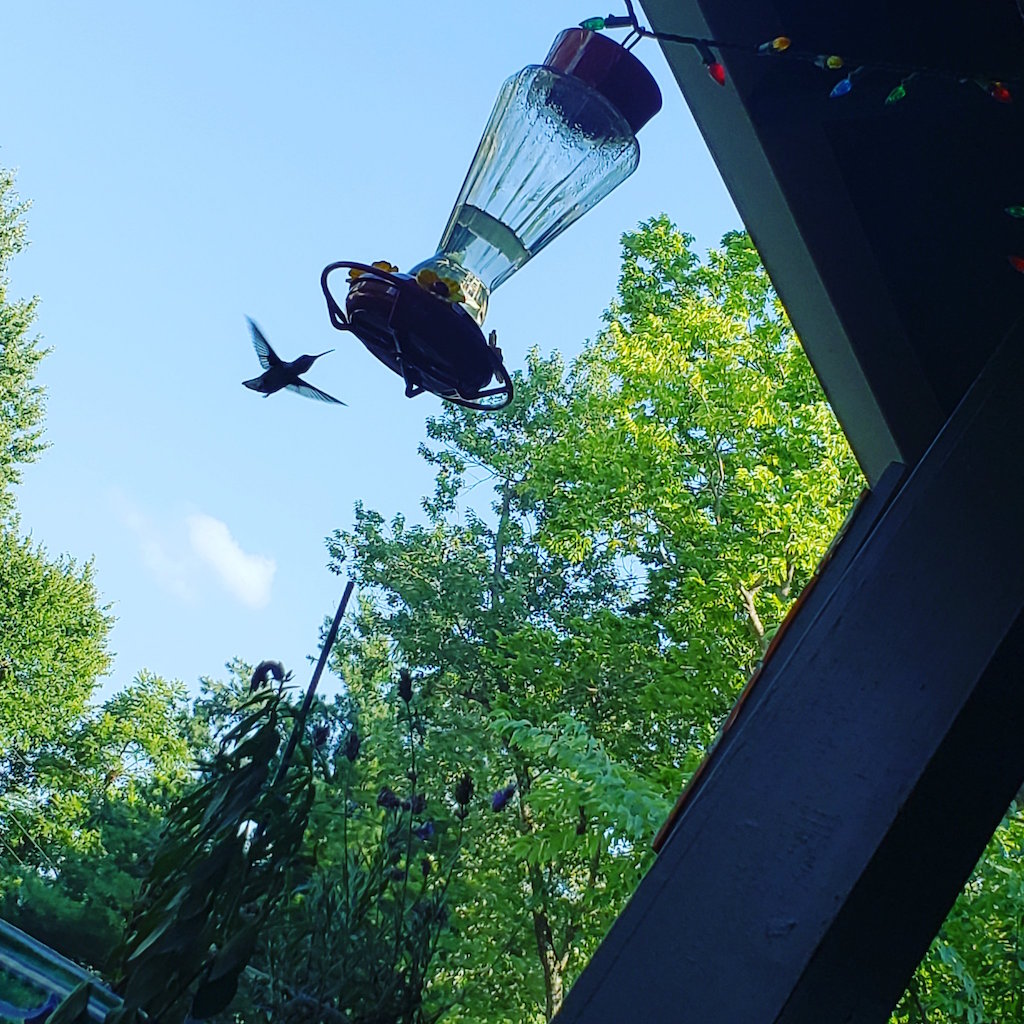 Researchers in soundscape ecology, the study of acoustic relationships between organisms and their environments, offer the term “anthropophony” to designate the variety of sounds emitted in human environments (anthropos meaning human; phone meaning sound or voice). These sounds commonly include language, music, traffic and the general clamor of our daily routines. The nonhuman counterpart of anthropophony is “biophony,” the collective sonic creations of diverse organisms living in a particular biome, such as birds, insects, and amphibians. “Geophony,” in turn, encompasses sounds of the earth: wind and rain, running water or waves, and seismic events.

Ecologist Bernie Krause, who has been recording natural sounds for decades, estimates that half of the soundscapes he has recorded have now gone silent. For ecologists attuned to soundscapes through years of practiced listening, aural shifts can signal trouble, as with the loss of certain nonhuman voices through extinction, or the early arrival of others due to climate change. Most of us, however, lack this basic attunement to biophony. As a species accustomed to visual manifestations, Krause notes, we often neglect the other senses in our awareness of place. In an unexpected twist, the pandemic’s temporary stilling of anthropophony has brought the sounds of nature, and particularly the voices of birds, to the surface once more.

Birds are a nearly ubiquitous presence in human landscapes, whether it is pigeons scavenging on city sidewalks, the distant honking of migrating geese, or the turquoise gleam of a robin’s eggs tucked into the eaves. Enthusiasm for birdwatching has surged during the pandemic, but birds have long been revered as harbingers, teachers, and sentinels. Avian well-being is a shorthand for the overall condition of an ecosystem. Think of eggshells thinned by DDT, as documented by Rachel Carson in Silent Spring, or the proverbial (and real) canary in the coal mine.

Birds offer important environmental clues. They anticipate shifts in weather patterns and alert others, including members of other species, to a predator in their midst. They are almost universally personified: ethno-ornithologists report that human-bird encounters are widely perceived as person-to-person interactions and kinship relations. Accordingly, bird calls are widely monitored across cultures. Calls, distinct from songs, are short and prosaic, consisting of a simple announcement between pairs, or between parents and offspring: “Here I am.” Birds who are primarily callers rather than songsters—owls, ravens, raptors—are often invested with mythic significance and portent. Bird vocalizations carry warning as well as comfort. In some cultures, birds are believed to help people cope with uncertainty and changes in the social, natural, or supernatural realm.

In monastic traditions, the spiritual value of being still and attentive, of abiding in silence and solitude in the search for God, has ancient roots in a practice called prosoche. Honing one’s attention toward the created world meant seeing things clearly, without egotistical fetters. Theologian Douglas Christie argues that prosoche can be cultivated as a contemplative ecological practice, for believers and nonbelievers alike. Charles Darwin, he notes, was unusually proficient at prosoche. As he perfected his naturalist skills, growing ever more attuned to the sights and sounds of birds, Darwin developed a capacity to make himself disappear in order to slip, undetected, into the world of other creatures.

Philosopher Iris Murdoch similarly endorses a spiritual exercise of “unselfing” that releases one from the confines of self-absorption. Murdoch relates that in a moment of anxious brooding, she catches sight of a kestrel hovering in the sky. The brooding dissipates, and along with it a preoccupation with self-concern. These welcome occasions of self-forgetfulness remind us that we are part of something beyond ourselves.

Disappearance of the self is a prominent theme in many spiritual discourses regarding prayer. Simone Weil understands extreme attention as a form of prayer in which the “I” disappears and the soul empties itself out, in preparation to receive the Other. This turning away from self-preoccupation is affirmed in accounts of prayer as a radically decentering spiritual exercise. Often conceived as a practice of inwardness, prayer is perhaps better understood as an expression of outwardness. The power of turning toward the Other originates with something external to the self. The essence of prayer, then, is response to a call from beyond.

The prayerful posture of the self before the Other is sometimes called “anthropophany,” where “phany” connotes an appearance or exposure of oneself to the divine. Anthropophany has a paradoxical quality: the presentation of the self before another is simultaneously an act of self-withdrawal, of awaiting and attending. This manifestation of the self in prayer is the counterpart to theophany, that is, the showing forth of God. Voluntary decentering of the self expresses vulnerability, a willingness to put oneself at another’s disposal, writes Jean-Louis Chrétien. Prayer, as response to another, is also a statement of belonging.

The human tendency to deny this condition of belonging is a testament to our arrogant need to see the world as revolving around ourselves. We see this anthropocentric bias in good news stories of nature rebounding in the midst of pandemic-induced lockdowns. Widely circulated reports of animals reclaiming city streets, or fish and birds returning to clear-running waters, foster a convenient illusion that a brief interlude of human inactivity is sufficient to save the planet. Even nature’s harmful and unpleasant aspects have long been interpreted by theologians as a commentary on the significance, for both Heaven and Earth, of the human drama of sin and punishment. The Protestant reformer Martin Luther, for example, understood the existence of noxious plants, stinging insects, fearsome animals, and plague and pestilence as “so many messengers” of God’s wrath at human sinfulness that disrupted nature’s original perfection and harmony. Secular versions of this reading of nature are popular among environmentalists who see the pandemic as retribution for human transgressions, such as habitat destruction that enabled the virus to leap from nonhumans to us.

Is it possible to acknowledge human complicity in creating the pandemic without yielding to the temptation to center ourselves in nature’s story, as saviors or villains? Perhaps greater attunement to nature’s sights and sounds can work against the tendency to spin narratives around ourselves. The discipline entailed in the patient waiting of one who listens attentively to biophony, I am suggesting, partakes of the self-emptying gesture of prayer and prosoche. In a silent echo of the bird’s call—“Here I am”—the human listener responds like Samuel to God, “Here I am, for you called me.”

Samuel is called repeatedly by God before he responds, for he is unable at first to recognize the voice that addresses him. In the same way, bird language can be difficult for humans to parse because of our distinctive mammalian auditory apparatus. The gulf can be bridged, biologist David Haskell writes, through the gift of attention. Through practiced listening to the natural world, we “connect to meanings that emerge from the deep time of our membership in life’s community.” To learn the language of birds is to enter into what Haskell calls the language of belonging.

The surface resemblance of anthropophany and anthropophony, words that feature humans centrally, is suggestive: anthropophany as humble receptivity to the presence and voice of another, and anthropophony, as the collective human noise that often overwhelms the reception of nature’s sounds. We might think of attentive listening and watching in nature as a refuge from the routine din of human sounds. In the face of ongoing uncertainty about the future, we can embrace pandemic-induced moments of stillness as a chance to cultivate prayerlike habits of attention. Put differently, much as anthropophany marks a preparative movement toward theophany—a manifestation of the divine—so being present to nature’s sounds enables the reception of what we might call biophany: the showing forth of nature’s sacred vitality.

The poet Tim Robinson, who died earlier this year from the novel coronavirus, suggested something similar. Robinson was a gifted writer and cartographer, and an avid listener and observer of rock, wind, and water (much of his work focused on the west coast of Ireland). Above all, he was attuned to the ancient entwinement of human and nonhuman language that surfaces audibly in placenames and placelore. Robinson described his work not as geography but geophany: If theophany is the showing forth or manifestation of God, he wrote, then “geophany therefore must be the showing forth of the earth.” Biophany, I suggest, like geophany, carries a similar sense of making plain what is often hidden in the landscape, not just visually, but aurally as well. Biophany is made manifest by practiced receptivity and attunement.

Attunement, in its literal meaning, indicates conditions of accordance, or a harmony of sound. A closely related word, atonement (Latin, tonus: sound, tone) makes a stronger claim on our culpability and moral responsiveness. Attunement-as-atonement suggests the need for reparations—a delicate process that often begins with listening to the stories of others.  The slowing down of the human world in the wake of COVID-19 is an unasked-for opportunity to listen attentively and respond.

Looking for something specific?

Join our mailing list to receive alerts when new submissions have been added to the Real Ground Conversation.

We encourage you to submit your writings, photos and videos.