Boundaries, Connection, and Imperfect Karma in the Time of Covid
 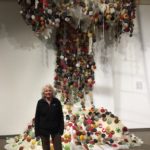 Edie is a sculptor, painter, writer, and mother whose work seeks to honor the beauty and mystery of the world. She has also worked as an educator, environmental advocate, and National Park ranger. Edie divides her time between Prescott, in Arizona’s Mogollon Highlands, and the Pacific Northwest. 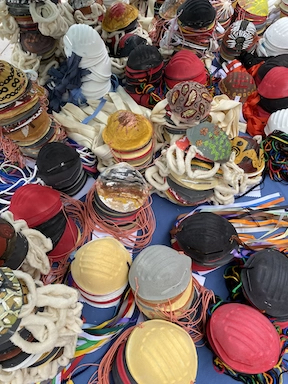 Unlike many in this beleaguered world, I have the privilege of spending whole days outside – I don’t take this opportunity for joy lightly, and thus have paid special attention this spring to the smaller birds. Last Sunday, at 7000 feet, in a fir forest that I’m sure many would not associate with Arizona, I gratefully received the gift of seeing a pair of Olive Warblers.  They appeared suddenly in the light of approaching evening, his feathered hood an eye popping cadmium orange, hers a more subdued yellow green – each sporting a diminutive bandit mask and a double row of sprightly white wing bars. Together they foraged at the outermost branch tips 50 feet above us, then twirled lightly and in a couple of strong wingbeats disappeared beyond my perception.  It was a glimpse, a tiny light moment in a period that seems both weirdly stretched and strangely compressed.

There is nothing like a migrating bird to remind you that distance is surmountable. The Whimbrel, in the Sandpiper family, humbles with its herculean migration; nesting in the arctic and wintering on the southern coasts of six continents.   Hummingbirds spend the winter in Central America and rush northward toward a temperate forest nesting season with hearts beating up to 1260 times a minute and wings 15-80 times a second. We see the Olive Warbler at the northern edge of its range; it breeds up here in the mountains of the American Southwest, but is a year-round resident of the highland spine that extends the length of Mexico. An insect eater during our well documented insect apocalypse, it is vulnerable to pesticide use on both sides of the border.  If you study the range maps in a bird field guide, the idea of political boundaries – those self-importantly drawn delineations – becomes both absurd and dangerous.

And what about the human boundaries that keep us justifying and accepting all sorts of prejudices, brutalities, and unjust policies? The environmental racism that has played out with tragic consequences on the Diné (Navajo) Nation comes to mind.  Several years ago, I participated in a workshop that educated artists on the impact of uranium mining on Navajo lands and people.  Hope and Trauma in a Poisoned Land, hosted by Flagstaff Arts Council’s Coconino Center for the Arts, was designed to give artists a voice in what has been called a slow motion environmental and social catastrophe.  Over the course of the training, we heard from medical and environmental experts, walked on abandoned uranium mines, and heard stories and perspectives from Navajo people of their experiences of radiation-related impacts to their bodies, their land, their water, their animals, and the natural materials and objects used in their everyday lives.

Uranium mining began on the Navajo Nation in 1944 as the Manhattan Project was developing the bombs that would obliterate Hiroshima and Nagasaki. Through 1986, mines in Dinétah supplied nearly 30 million tons of uranium to feed the country’s Cold War bomb-making appetite. There are still many abandoned mines on Navajo land, some of them very close to the Little Colorado River, which flows into the Grand Canyon. The legacy of uranium contamination remains.  Local health effects include lung cancer from inhalation of radioactive particles, as well as bone cancer and impaired kidney function from exposure to radionuclides in drinking water.  Uranium measurements in the urine of some babies born in Navajo country actually increase during the first year of life.

One of the many striking and unconscionable elements of the environmental, human rights, and health disaster of Navajo uranium mining is that, even though the risks were known, miners were not provided even the most basic information, safety training, or personal protection. I chose dust masks – the absolute minimum protection that could have been, but wasn’t, offered – as an element for the sculpture I would make.  A mask over the mouth protects, but it also is a potent symbol for silencing, and relates to the silencing of the miners’ health concerns as well as the lack of warnings from government officials over the years that the “yellow dirt” could make you very, very sick.

I sent the information outlined above to artists and friends all over the country and asked them to join me in the project.  Over 300 people from Hawaii to Florida responded, sending masks decorated with heartfelt expressions of concern and commitments to not ever let something like this happen again.  The resulting sculpture, Yellow Dirt Testimony, was a 22-foot mushroom cloud constructed from these dust masks.

By late April of this year, the Navajo Nation had the third highest Covid-19 infection rate in the United States.  I checked in with one of the people organizing relief efforts for the Navajo and Hopi tribes and made the decision that the best use for Yellow Dirt Testimony was to disassemble it so that the masks that were still useable could be part of the protection effort.  We had taken the rubber band part off each mask, so in order to (re)repurpose them, each one needed to have elastic or ties reattached.  I sought help from friends and, again, the response was hands-on, and heart felt: an elementary school friend sent 200 yards of elastic from Massachusetts, my welding teacher stayed up to 3 am sewing on ties, my daughter’s first grade teacher met me at the steps of my porch to drop off finished masks, 50 and a hundred at a time.

The end of the story for this sculpture is, very sadly, fitting.  My brother called it “Imperfect Karma.” And I guess it is that, but it is also the logical and tragic conclusion of decades-long enforcement of the perceived boundaries between people that have allowed one group of people to treat others as expendable.  The Diné still do not have protection – more than 150 years ago, the Navajo and many other tribes signed treaties with the federal government giving up their land in exchange for funding of things like housing, infrastructure and health care. But for decades that hasn’t happened.  Many Diné still do not have access to running water.

The gestures of help to transform the masks first into art and then back into useable protection may seem small, but cumulatively they are significant, arising from a feeling of kinship and connection.  A virus, like radiation, knows no boundaries.  But all the people helping also refused to accept the old separations. My son and his girlfriend delivered 1281 masks from Yellow Dirt Testimony to an indigenous-led organization in Flagstaff to be distributed on the Navajo and Hopi reservations.

One hundred and seventy years ago, within decades of enduring forced removal from their homeland in the verdant Southeast and walking thousands of miles on the notorious Trail of Tears to the newly designated “Indian Territory” in dusty Oklahoma, people of the Choctaw tribe scraped together $170, the equivalent of more than $5000 today, to send to Ireland during the potato famine.  Their generosity has resonated down the decades.  In just a few days during the first week of May this year, Irish people, citing that long-ago Choctaw kindness reciprocated with individual donations to Navajo and Hopi relief adding up to more than $500,000.

Within the week of delivering the masks to Flagstaff, my son and his girlfriend also drove several hours to Poston, Arizona, site of the largest of the American concentration camps where 17,000 people of Japanese descent were incarcerated during World War ll. It was a pilgrimage of sorts for her; her maternal grandfather had been imprisoned at Poston.  They carried with them several paper cranes folded in Japan and brought to Arizona by Hibakusha, survivors of the bombing of Hiroshima, to commemorate connections over time and space with the sorrow of Navajo uranium mining widows.  Our boundaries can seem recalcitrant and solid but in reality they are illusory and permeable in a thousand ways.  The connections between us are as real as the flight line from one mountaintop to another.

I am imagining that at this moment somewhere high over the Sonoran desert a small bird with a tiny bandit mask is winging his determined way over a 27 foot steel barrier.  His belly is full of Mexican bugs and he will alight at evening on a springing branch tip. He’ll send a song across the fir-scented air and a sweetheart dressed in yellow will answer.  I am imagining a time when humans will treat distance with his same resolute disregard.  We will have realized that the separations that allowed us to believe one people or one place less valuable than another were constructed from old ideas and passing illusions – a peculiar line someone once thought was important, like a border drawn in fading ink on an antique map, insignificant and forgotten, far below our high and winging dreams.