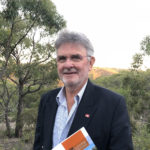 John lives with his partner Judith and their two dogs, Chloe and Mollie, at Upper Sturt in South Australia. He is 74 years of age, has 2 children and 5 grandchildren. Central to John’s life is the daily challenge of harmonizing a love and care of the natural world with the pragmatics of living a thoughtful, productive and rewarding life. John is an Emeritus Professor at Flinders University. He specialises in rural education.

Photo is of sunrise at Upper Sturt where we live in South Australia taken on ANZAC Day (cf Veterans Day) this year. 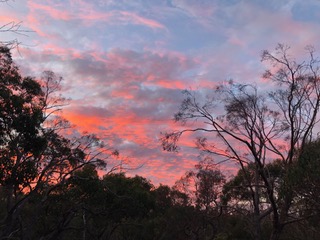 If we pay attention, this pandemic can reveal what sort of world we want to live in.

This is a very fertile declaration by the Natural History Institute Real Ground Initiative; fertile in the sense of cutting through much of the tinsel and trivia about ‘the good life’ which is served up to us each day via instant media feeds.

Borrowing from Yoram Harpaz, who explored fertile questions as a preferred mode of pedagogy, the declaration is fertile because it is open, undermining, rich, connected, charged and practical. And I would add, hopeful.

So what signals, what indicators, what evidence is emerging of the possibility of living in a different world?

Putting aside the temptation, perhaps the absolute necessity, to spend a tome on defining terms and considering the problematics and the sheer audacity of there being the possibility of something different, I offer a few brief thoughts.

And before doing so, I acknowledge that I am writing from a position of privilege, comparative plenty, and peace.

There have been instances of greed and ‘dog eat dog’ behaviour as people rushed to secure supplies of essentials at the outbreak of the virus. In my judgement, this has been far exceeded by acts of sharing, generosity, understanding and patience.

In many instances, raw competition has been overtaken by cooperation because people are seeing and believing that we really are all in this together. Not that our circumstances are identical but rather that the potential to be struck down by COVID-19 is real for all of us.

So, first, I would like to live in a world where competition and market domination as the main driving forces for achievement and success are dialled back and cooperation is dialled up. This does not mean the pursuit of excellence gets pushed aside; rather we need to look more inwardly and aesthetically for energy and motivation to aspire and do well.

Secondly, at least as far as Australia goes, I would like to see a better, more productive blend of self-reliance and dependence on other countries for essential supplies. This is not a call for a return to the ‘good old days’ or tariff protections or fear of ‘the other’. Rather it is a call to re-calibrate the extent to which we have prioritised service and tertiary economic activity over all other modes of work and production, many of which are foundational and will remain so like food production.

Looking up at the morning sky each day and then checking it out from time to time- virtually no planes. And in some parts of the world, people are seeing stars in the night sky for the first time in years.

I have used air travel extensively for decades and certainly value being able to go halfway round the earth in less than a day. But it is also staggering to think about the pollution load being taken out of the atmosphere by grounding thousands of aircraft and all that goes with this.

Tourism accounts for about 45% of all air travel and around 10% employment worldwide. But the decline in tourism which is extracting a very heavy human cost in loss of jobs and family incomes also has some upsides. One particularly poignant example- nests of endangered leatherback turtle eggs on a favourite tourist beach in Thailand- the first for many years.

Thirdly then, I would like to live in a world where there is a better balance between travel, tourism, and environmental health. I would like to expand this wish to include many of the other dysfunctional tensions we currently have to live with such as demolition of good and functional buildings and amenities as a precursor for development rather than thoughtful re-design and re-use. And building houses and freeways on prime agricultural land and sacrificing wilderness in the name of progress.

Paul Virilio, a French a philosopher and cultural theorist, in his book entitled Open Sky, explores speed and the collapse of the experience of journeys and journeying principally as a result of technology. He has named this collapse dromospheric pollution, the pollution of the instant.

The frenetic pace of change in many if not most spheres of life- and there are great benefits which do accrue from much of this–imagine surgery without anaesthetics– frequently hides from us the value, the nourishment, that comes from solitude and time for contemplation. And this is exacerbated by disconnection from the natural world and seeing it mainly through a utilitarian lens rather than a nurturing and sustaining lens.

So my fourth wish in our world after COVID-19 is for a greater appreciation of the time it takes, as well as the resources, to bring about real improvements whether they be in areas like academic achievement, well-being, social harmony and tolerance, or aesthetic appreciation. Re-capturing the value of journeying as a new priority perhaps?

Finally, I would like to live in a world where there is a massive closing of the gap between the haves and the have nots. Remuneration for work effort needs to be radically recalibrated especially from the top down. Many senior executive salaries and income streams of business owners are, frankly, obscene, when compared to what most of their employees take home. The gaps have to be closed while retaining sufficient incentive for people to strive and embrace taking worthwhile risks.

Yes, if we pay attention, this pandemic can reveal what sort of world we want to live in.