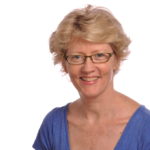 Deirdre Dempsey-Rush worked as an editor and lexicographer in book publishing for many years before becoming a copywriter. She is now associate creative director at an ad agency on Madison Avenue. She has lived in New York City, on the island of Manhattan, since the mid-1970s.

I grew up by the Jersey Shore, and the beach was where I found solace. Always an anxious child, I could breathe easy there, lulled by the rumble of the surf. I thought of each approaching roller as a mother coming to collect her babies, the remnants of the waves that had come before. Even the biggest breakers that came after a nor’easter were protectors in my eyes. We kids had a game we called waterlog: at low tide, we’d lie in the shallows near the shore and let the waves push and pull and even smash down on us, never resisting. We thrilled at feeling simultaneously overpowered and utterly relaxed.

I came to New York City in the mid-70s to go to college and have never left. Now, I live in easternmost Midtown, which is a forest of high-rise office and residential buildings. My block is one of Manhattan’s few dead ends, and it’s quiet, which is a great asset. But it’s not close to any of our city’s great parks, and because of the pandemic, we’re supposed to limit our ventures out. So, most days since the beginning of lockdown, I have taken my dose of nature from the much-maligned, long-time dumping site known as the East River, which is a stone’s throw away, if you’re a major league pitcher.

I cannot see the river from my apartment—a mixed blessing, because in order to get my fix, I’m forced to make myself presentable, mask up, and get out there. In the early days I didn’t go outside at all. I was waiting to see if I’d been exposed to the virus on the subway or the bus, or at my open-plan workplace. Once I’d isolated for a few weeks, I was as sure as I could be that I wasn’t a spreader, so I could venture forth. The river became my destination.

From our dead end, about 100 yards east of my building, I can see the water and even feel its breeze, but a closer encounter requires a brief stroll west to First Avenue, down a block, then back east. At the end of that block is a decaying but dignified shale staircase of pre-war vintage like the buildings nearby, which can take you all the way down below street level to a lovely park and dog run. Or, halfway down, you can make a left onto the more utilitarian elevated concrete walkway that becomes the pedestrian bridge across FDR Drive. An 8-foot-high, concave chain-link fence envelopes you as you cross above the speeding hulks. Descend the stairs and you find a narrow footpath, some straggly trees, and a few benches. You’re as close as you can get to the water.

Like my old friend the Atlantic, the East River is wild, and it is vast, running from the Upper New York Bay at its south end to the Long Island Sound at its north. The West Side’s watery counterpart, the noble Hudson River, flows predictably and inexorably from north to south. But our East River is at the mercy of the moon. It’s not a river at all, actually, but a tidal estuary, a child of the Long Island Sound, the Atlantic Ocean, and a drowned river valley, flowing in different directions as the tides shift twice a day. It’s always a surprise to see which direction the whorls are traveling.

Until recently, my impulse had always been to look beyond the water toward Roosevelt Island, which rests in the river between Manhattan and Queens. There stands a picturesque, ivy-covered, Neo-Gothic compound known variously as the Renwick Ruin, in honor of its architect, and the Smallpox Hospital. The structure was designated a New York City Landmark in 1976—a surprise to me, as in this town we’re in the habit of tearing down decrepit old things to make room for shiny new ones. In the written record regarding the preservation of the site, there’s precious little elaboration on the original purpose of the hospital when it opened in 1856: to sequester victims of a plague thattook over 500 million lives in the last 100 years of its existence. Today, New Yorkers with COVID-19 are treated in all of our hospitals, a dozen of which are within a mile of my apartment. I hear a lot of sirens, especially at night.

There’s more to see to the south of the Smallpox Hospital: the elegant FDR Four Freedoms park, designed by Louis Kahn, and the red curlicue Pepsi logo that looms behind it. These days, though, leaning on the rusty railing, I stare not across the river, but straight into the water. Sadly, no soothing burble or slosh can break through the ambient roar of FDR Drive to ease my worried mind. Designed by car-worshipper Robert Moses, the FDR remains heavily traveled by essential workers, of which there are so many here, even at the height of lockdown.

It’s up to my eyes to take in the wildness that will carry me away, and they do. I can completely lose myself in the restless, roiling tides. Although you would hardly call it clear or clean, the water is still its own free thing. The surface, which has hills and valleys, like irregular terrain, may be choppy with foam, or swirling smoothly, with plaques of calm framed by dancing curls of currents. Small vortices wander by, often strung together in clusters like a necklace. At midday, when the sun is high above in a clear sky, a thousand rays stab diagonally down into the brackish, murky green, while reflections glitter and flash off the surface, blinding me. As I stare down, my eye can’t be sure what’s water, shadow, reflection, or the depths below. Even my phone’s camera can’t figure out what to focus on. It’s confusing, dizzying, mesmerizing. What’s really there? What‘s not there at all? For a few minutes I’m tiny, insignificant, lost. And my soul is protected.