Requiem for a Glacier
 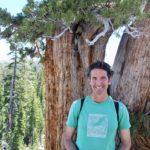 Richard J. Nevle is a teacher and environmental scientist with roots on both sides of the Texas-Mexico border. He serves as the Deputy Director of the Earth Systems Program at Stanford University, and received the university’s highest teaching honor in 2018. Nevle has authored numerous scientific articles and is currently working on a book of essays and poems focused on the natural history of the Sierra Nevada with Steven Nightingale. He lives in San José, California. 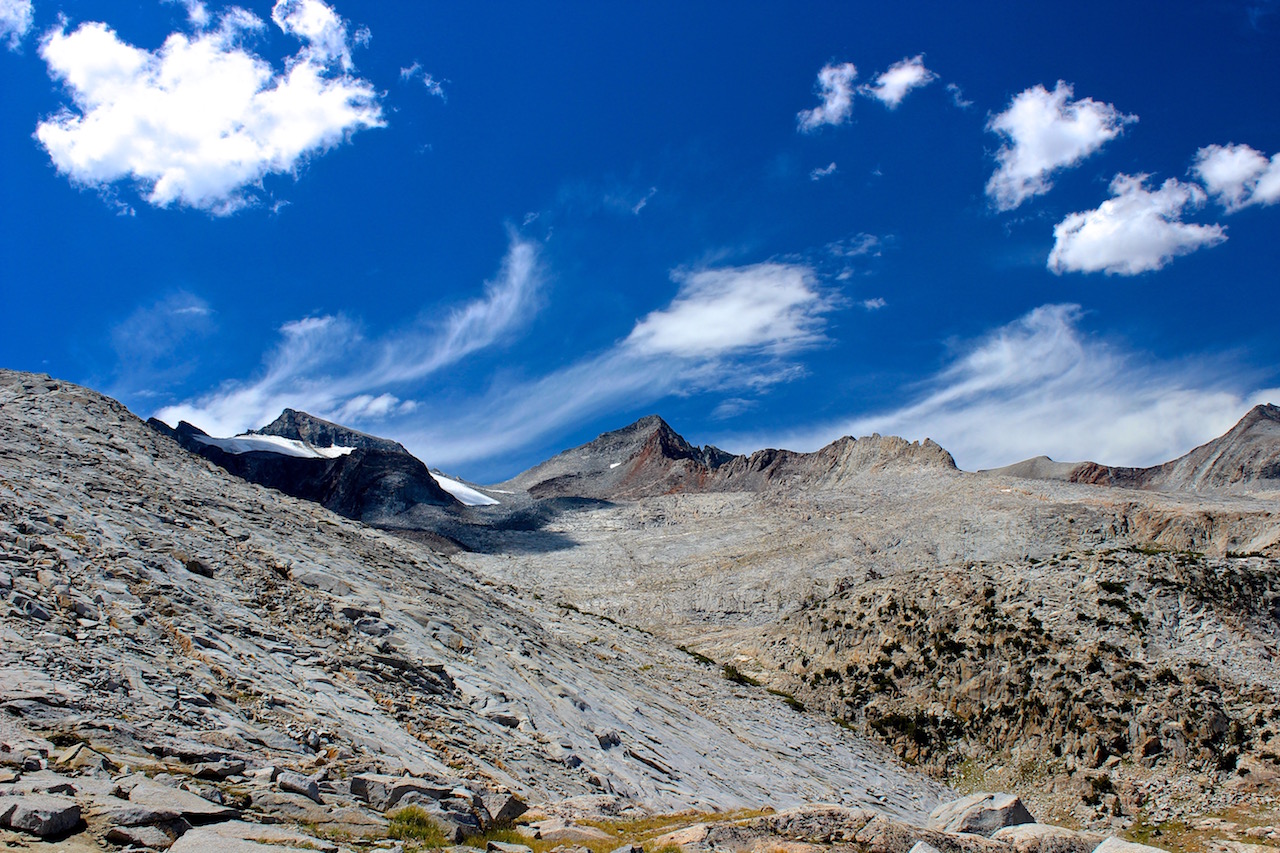 As children we can’t imagine that even the mountains themselves are impermanent. That their forests, their glaciers, their bright and wild rivers are only temporary. We can’t grasp that the immensity of geologic time, the inexorable waxing and waning of the moon, the changing light of the seasons each bear with them finite temporalities. But they do. And with the passage of our own seasons, we witness geologic and human time converge to strip away things of this fleeting world that we thought could never leave us.

In the summer of 2011, my father, intubated and unconscious, passed his last days in a hospital bed. A respirator, a dialysis machine, and various other artificial organs did the work of life that he could no longer do for himself. A mechanical thrum accompanied the labored rhythm of his breathing, beating out a slow requiem.

Outside the window of his room, a long drought wore on, wringing the Houston air of its oppressive humidity, extracting moisture in aliquots from the clay-rich soil. The withered earth heaved sidewalks into choss piles of concrete. Oaks I’d climbed as a boy discarded their limbs. The white eye of the Texas sun bore down from a featureless sky, leaving little shade and even less comfort.

As my father lay in his bed, I sat there with him, saying prayers to myself. Saying prayers to a God I hoped was listening. I stroked the rime of my father’s beard, the soft snow of his hair. I held his cool hand and told him stories. This tenderness, this filial reciprocation across decades, would have been too intimate in any other circumstances. What a strange kind of privilege it is to say goodbye.

After my father’s passing, I found myself lost, wishing I could hear his voice, his reassurance. I pored over topographic maps of the Sierra Nevada, looking for some kind of direction in the wilderness. They led me to the widely spaced contour lines of Lyell Canyon, in the heart of the Yosemite high country. There, in the summer after my father’s death, I perched on the polished granite banks of the Tuolumne River. I cupped its water in my hands, gathering the light of brilliant clouds and shimmering cobbles. I let the river rinse the salt of tears and sweat and spill over my body. Wildflowers swayed in the surrounding meadow, stems bending in time with the river’s rhythm.

I followed the ink-blue artery of the Tuolumne as it traced across the map and rose out of the canyon, leading to Lyell Glacier. I aimed for the Tuolumne’s glacial source, ascending through lodgepole forests, through groves of twisted whitebarks and their corvid caretakers, past treeline, past cradles of alpine wildflowers nestled among heaps of glacial moraine, and then finally to a view of the Lyell Glacier itself, where it cleaves to a wide amphitheater of splintered rock near the precipitous east-facing slope of the Cathedral Range. Razor-finned, knee-deep suncups dimpled what remained of the glacier’s surface, impeding travel up its steep-canted slope until the ice gave way to a bergschrund—a yawning crevasse between the glacier and the mountain and the cobalt sky beyond.

The Sierran glaciers that John Muir found in all their glorious and blooming vigor in the late nineteenth century are now in their senescence. Yosemite National Park geologist Greg Stock has reported from an analysis of surveys of the Lyell Glacier that it ceased its internal movement more than a decade ago. In so doing, the Lyell has become bedridden, devoid of the very dynamic quality that defines its glacial essence.

Glaciers, like my historian father, are the keepers and shapers of stories. The glaciers now in the Sierra emerged into being a few centuries ago when California’s climate turned cooler and wetter for several hundred years, many millennia after the passage of the last great ice age. Like all mountain glaciers, those of the Sierra began high up where massing snow persisted in shadowed cradles through summer, compacting and transforming into translucent, crystalline ice. Ice accumulated layer after layer, year after year, collecting traces of dust born of volcanic eruptions, of forest pollen and forest fires, of the industrial revolution, of nuclear explosions. Bubbles dispersed throughout the glaciers’ mosaics of crystalline ice preserved tiny time capsules of trapped air, bearing witness to the increasing concentration of greenhouse gases in the atmosphere. Bubbles compressed as ice thickened, attaining a mass so great it slowly collapsed under its weight, yielding to gravity in a slow, fluid cascade downslope.

At the Lyell’s melting edge, I listened to water run underfoot through throaty hollows hidden in the ice. The meltwater spoke in an almost human chatter. I’d first heard the voice of glacial meltwater decades before, in my early twenties. It was during my first field season working as a graduate student in Greenland near the immense Kangerdlugssuaq Fjord, a wild sea-haven for marine mammals, glittering with icebergs. I’d been working the long hours of arctic summer days, scrambling up nunataks—vertiginous islands of rock that protrude above glaciers—making intricate maps of mineral-filled veins as I sought to understand water that had passed through stone tens of millions of years ago.

For almost a month of that first field season in Greenland, I worked alone. One afternoon about two weeks in, the sound of my graduate advisor’s voice began to emanate from the ice. Had his words somehow strayed through a network of glacial crevasses? I listened, but there was only the murmuring of meltwater, a song sung only for itself. By the third week of solitude, I began to converse with the elements out of sheer need, just as I do now with my father’s ghost when his voice finds me in quiet moments. But too many of our conversations end up in one-sided arguments, with me still angry that he left too early and too young.

Now you might interpret, from this reminiscence of my father in the context of a glacier, that I perceived him as cold and remote. But I tell you, nothing could be further from the truth. For you must understand glaciers and fathers as I’ve understood them: as mysterious and powerful; as dangerous and terrifying; as forces of nature; as gods in their own rights.

Glaciers are the patient sculptors of the cold, high, mountain realm. They transform their alpine milieu into filigreed cathedrals of rock, where a lone pilgrim may give praise to sky and storm, wonder at the inscrutable mysteries of nature and of the human heart, and mourn for what’s been loved and lost. Their frozen waters will melt and sublimate, transubstantiating themselves as they engage in unceasing acts of creation, begetting universes of clouds, coyotes, skypilots, children—fathering forth all manner of wild things.

Near the Lyell’s vanishing edges, I watched its meltwater spring from centuries of frozen captivity, singing its freedom in an inscrutable tongue. From its glacial source the water spins downstream, threading its way toward the subalpine meadows of the Tuolumne River, then on to the river’s deep granite canyon, and on to the Hetch Hetchy Reservoir where it is impounded by the O’Shaughnessy Dam. The Tuolumne continues past turbines to other reservoirs and more turbines and down the massive San Joaquin pipelines to the urban labyrinth of the San Francisco Bay Area. There, it might trickle out of a schoolyard spigot and into the mouth of a child, or out of a cracked, sun-bleached hose to grace a small garden.

Well-worn copies of the USGS Vogelsang Peak and Mount Lyell 7.5 minute topographic quadrangles sit folded in my desk. I pull them out from beneath a jumble of books and open them, following the blue vein of the Tuolumne to its melting glacial source in the Cathedral Range. I study the glaciers’ faint, swirling forms, consider their life-giving sacrifice.

The disappearance of Sierran glaciers, hastened by the maddening rate at which we are pumping greenhouse gases into our atmosphere, will leave our world diminished, less lovely, less full of possibility. How will we remember them? With a photograph? A reliquary of water? A memory? A longing?

To witness Sierran glaciers, to be among them, is a rare kind of privilege. I’ll honor them for as long as my legs will carry me, for as long as the glaciers remain. And each time I have the opportunity to walk among them, I will offer my prayers of gratitude for the gift of a father who fashioned in me a fierce love of wild things. I know of no better way to pay homage, as I listen to wind and water chant a lonely requiem.